This is the vision of the San Juan Mining Chamber, raised at the first meeting of the sector by the San Juan Agreement, and encourages taking advantage of the price of raw materials, especially minerals that accompany copper such as gold. Recovering regional competitiveness through taxation is key, whether at the national level where 85% of the total tax burden is contributed, or at the provincial and municipal level where in some municipalities there are “tax distortions” affecting the mining industry. 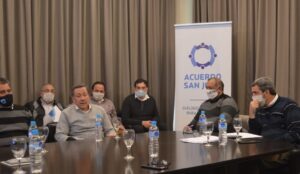 “With the State we must think together and have a vision of the strategic development of the mining provinces,” says Mario Hernandez, president of the San Juan Mining Chamber (CMSJ), after having participated in the recent meeting that aims to outline the San Juan Agreement promoted by the Uñaquista management.

Hernandez believes that this convocation is a great opportunity to put all the mining on the agenda and that “the spirit of this meeting is to see how we are going to get out of this crisis which, beyond health, is productive, economic and financial”. During the meeting, the entity highlighted that the mining projects in the province are being developed, especially the four most important ones that are copper: Filo del Sol-Josemaría, Altar, Pachón and Los Azules.

Given the international context where the gold ounce is reaching record figures and the copper pound is recovering its pre-pandemic level, we believe it is time to continue investing in San Juan, especially in the copper and gold projects. We must have a common agenda among all sectors, in order to develop about 20,000 jobs by 2030 and triple local exports,” the head of the CMSJ told representatives of the mining sector, construction and the authorities of the provincial Ministry of Mining.

What Hernández does not tire of stressing is that in the tribulation lies any possibility of investment and that there is much work to be done in this regard if mining projects are to be competitive
tivos.

“Obviously the greatest tribulation is to the nation state, so hopefully opportunities will arise, especially when you look at it project by project. In this way, through the feasibility of each one of them, it will be possible to determine the way to make them possible and look for a sustainability curve to produce for several decades”, he explain 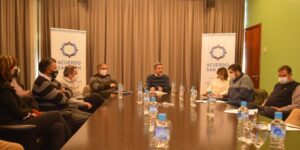 The WSJS assures that the greatest offer that the State can make, as a

counterpart of this, is to take the same roadmap. “That means making some corrections at the municipal and provincial level regarding certain distortions that have occurred in the tax side of the mining industry, in our case, but also in the industry in general. At the national level, there are still other proposals, but Alberto Hensel’s participation in the National Mining Secretariat is a strength to unify the best way to make the projects feasible,” says Mario Hernández.

As for the upcoming meetings in which the mining sector will participate, the entity’s purpose is to finalize a specific document to be presented.

“We all agree that we have to work and get investments. It is necessary to count on the genuine generation of funds to have a State with the capacity to develop the province of our dreams. We have to build new projects, but we also have to generate a whole push so that productivity, which cannot be had today, is recovered in the future when we have entered a new normality. We must rely on the institutional quality to generate confidence for new investments, and fiscal reasonability so that development comes from the hand of private activity that generates funds to the State to ensure health, education and security”, concludes the head of the CMSJ.