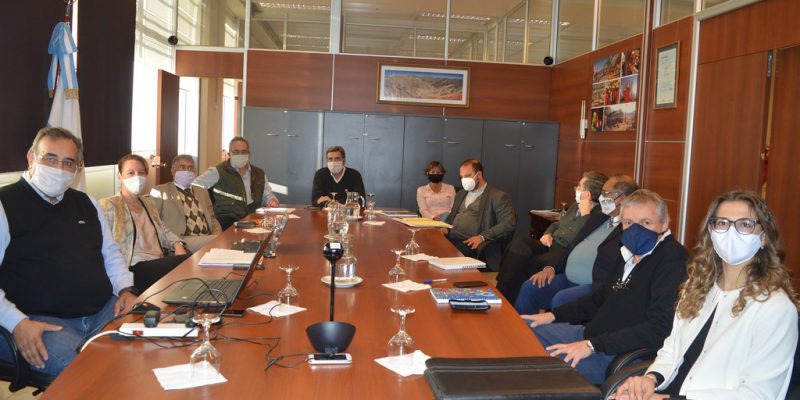 Via teleconference between San Juan, Buenos Aires and Australia, representatives of the Ministry of Mining and global authorities of the company Fortescue, evaluated the situation.

The Minister of Mining, Carlos Astudillo, together with ministry secretaries and members of the Mining Council, received a comprehensive report presented by the Argentine company Fortescue in charge of the Rio Salinas and Rincones de Araya mining projects. Representing the company via teleconference were its Executive Director for Argentina, Christine Nicolau, the President for South America, Agustín Pichot, and the Leadership team of Argentina Fortescue, among others.

The virtual meeting between San Juan, Buenos Aires and Australia was to report on the results of the exploration from the beginning of 2019 to this part and the work to be carried out in the short and medium term.

Among the reports presented was the definition of three large work zones in the Calingasta mountain range. The largest and with good results of copper mineralization is the so-called Rincones de Araya, a deposit that could be among the important copper deposits in southwestern San Juan.

In addition, the works in the areas of Vanesa and Rio Salinas were shown. To date, prospective and exploration work has been carried out, as well as the installation of the necessary infrastructure to increase the exploration of the area in sequence. Likewise, the office in Calingasta has been established for community development and support of the operation, where the logbook for the best selection of samples during the winter works.

In this sense, the holder of the mining portfolio expressed his gratitude to the company and proposed to work together to continue advancing, “to form a team to advance together with the valuation of the deposit. This is one of the objectives of the Government of San Juan, which is to put in value the natural resources we have. This is something we are asking of all companies, since we always say that mining concessions are for working them. That is why we must continue with these meetings to plan and give greater agility to the work that corresponds to you as well as our part,” said Engineer Astudillo.

In this respect, the directors of Argentina Fortescue declared that “once this pandemic is over and conditions are right, we can meet in person and continue with our work in San Juan. Our intention is to be able to replicate in Argentina the excellent results we have had in Australia”.

Finally, the president of Fortescue for South America Agustín Pichot said, “I share the idea, we accompany this intention of the government. In previous meetings with Governor Sergio Uñac we expressed our support for his project for the province. So while we can continue to move forward together to improve the quality of life of the people and deepen the work of exploration, you can count on us to achieve that goal.

It is a project in Advanced Exploration owned by IPEEM, operated by Argentina Fortescue since December 2018. It is located on the western flank of the Totora mountain range, 80 kilometres west of Calingasta. It is 3,200 metres above sea level.